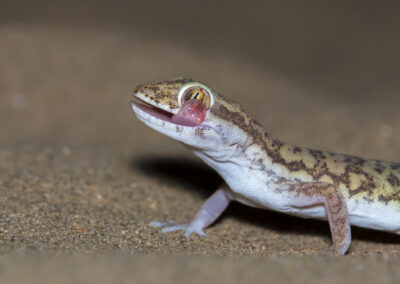 Sind sand gecko (Crossobamon orientalis), is endemic to South Asia and can be found in the desert regions of India (i.e. Rajasthan) and Pakistan. They dig burrows in sand, the only known gecko from India showing this behaviour. Take shelter in these burrows during the day and at night they are active. This gecko do not have eyelids, and frequently lick their own eyeballs to keep them clean. (Photo: Mr. Hardik Patel) 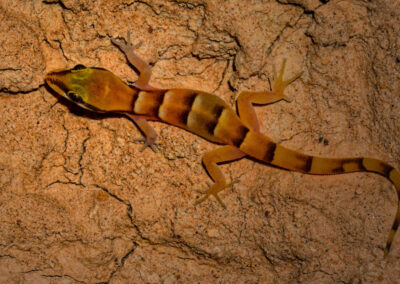 Persian Dwarf Gecko (Microgecko persicus) is one of the smallest Indian species of gecko with adults growing to a maximum size of one inch in length. It is very little known to science and has very restricted distribution in rocky hills of Jaislmer.(Photo: Mr. Omkar Pai) 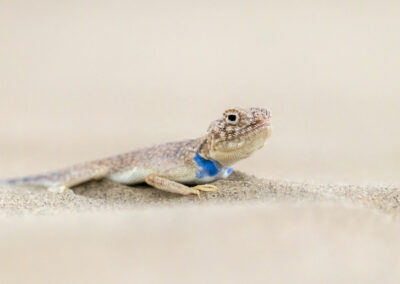 Toad-headed Agama (Bufoniceps laungwalasis), also known as the Disappearing dragon, one of the common agamid lizard seen in the sand dunes. Perfectly adapted for a life in sand. And when the lizard see the danger, it run and suddenly bury itself in sand, where it camouflages rather well. (Photo: Mr. Hardik Patel) 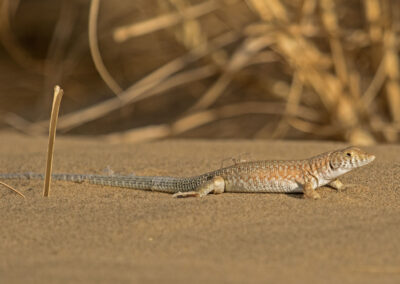 Indian Fringe-toed lizard (Acanthodactylus cantoris), is adapted for life in sandy deserts with fringe-like scales on their hind toes hence their common name. The species is endemic to Asia. (Photo: Dr. Dharmendra Khandal) 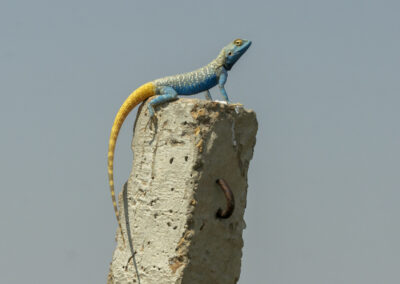 Brilliant agama (Trapelus agilis), is common lizard species in Thar desert of Rajasthan. Female always lives in burrow whereas Males never dig burrows and remain hidden under the stones and between the stones. Its body size, morphology and feeding habit depends on the local environment. (Photo: Mr. Shailesh Patel) 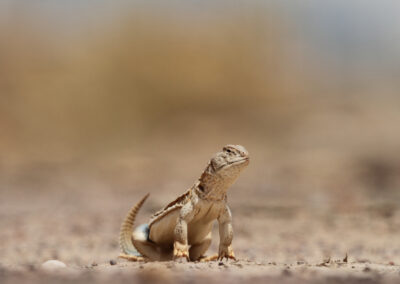 Spiny-tailed lizard (Saara hardwickii), is found in patches across the Thar desert, Kutch, and surrounding arid zones in India. Since it is found in loose clusters it often attracts predators such as raptors. It is also hunted by local peoples in the belief that the fat extracted from it is an aphrodisiac. (Photo: Dr. Gobind Sagar Bhardwaj) 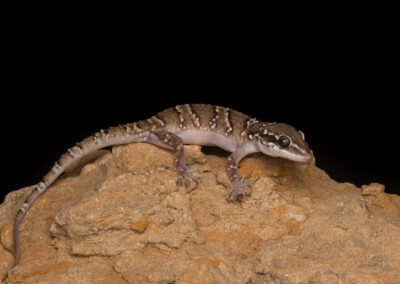 Termite hill gecko (Hemidactylus triedrus), is a species of gecko found in South Asia and a nocturnal species, they can grow to a maximum of about 7 inches from tip of snout to the tail. They feed on a variety of insects and are known to be frequently found in termite mounds. (Photo: Mr. Vipul Ramanuj) 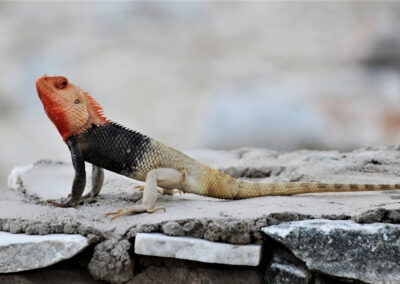 The Common Garden Lizard (Calotes versicolor), is an agamid lizard found widely distributed in the world. The Males become highly territorial during breeding season as they discourage intruding males by brightening their red heads and doing “push-ups”. Each tries to attract a female by inflating his throat and drawing attention to his handsomely colored head. (Photo: Mr. Ravinder Garga) 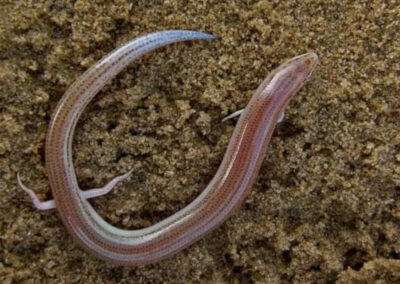 Sand Fish (Ophiomorus tridactylus), also known as the Three-toed snake skink, is a species of skink endemic to sandy desert areas of South Asia. It is also called the Indian sand-swimmer for its habit of moving just under the sand. (Photo: Dr. Dharmendra Khandal) 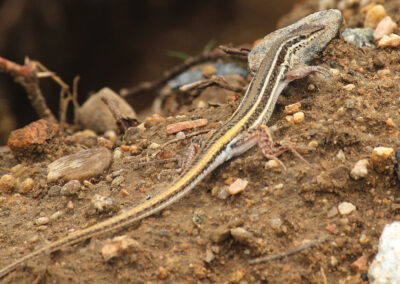 Pushkar Small-Scaled Snake-Eye (Ophisops pushkarensis) is a wall lizard in the family of true lizards (Lacertidae). It is the first Ophisops to be described since 1971 and the first from India since 1870. This is also the first reptile endemic to the Aravalli Range complex. This photograph clicked near Goela village, Ajmer, Rajasthan. (Photo: Mr. Dharam Veer Singh Jodha) 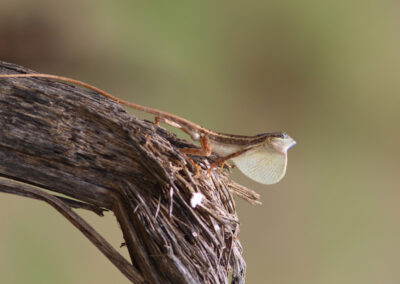 Spiny-headed Fan-throated Lizard (Sitana spinaecephalus), can be distinguished from all the members of S. ponticeriana clade in having a weakly-serrated dewlap with only a single blue line and white or yellowish color on the dewlap. (Photo: Mr. Vijendra Prakash Parmar) 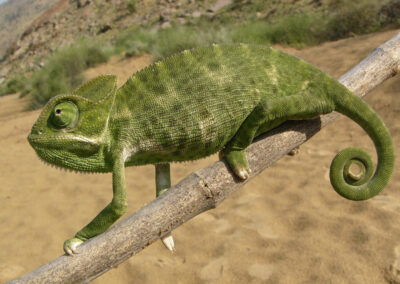 Indian Chameleon (Chamaeleo zeylanicus), has a long tongue, feet are shaped into bifid claspers and a prehensile tail. Its two eyes can move in different directions at the same time. It also can change the colour of its skin for communication with other chameleons and for controlling body temperature. By changing to dark colours, their bodies absorb heat. (Photo: Dr. Dharmendra Khandal) 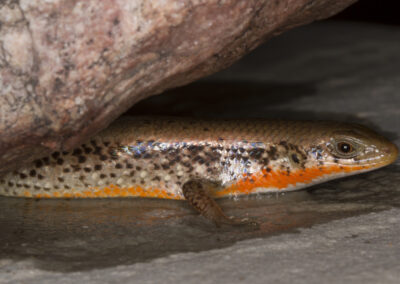 Bronze grass skink (Eutropis macularia), is a common, but shy, ground-dwelling species that is active both day and night. This species is quite varied in appearance, however, in the field, it can be identified by its bronze head, pale lip scales, and dark band along the upper flanks. Males in breeding conditions have reddish lower flanks and throat. (Photo: Dr. Dharmendra Khandal) 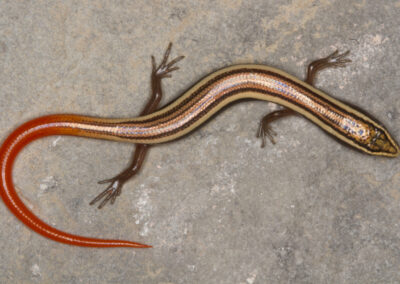 Common dotted garden skink (Riopa punctata), the young ones have a distinctive red tail, but this colour is lost in adults. The red tail is replaced by small spots and these spots coalesce to form continuous lines as the individual ages. The dots are present on the head and extends to the snout. (Photo: Dr. Dharmendra Khandal) Jerdon’s snake-eye Lacerta (Ophisops jerdonii), is a species of lacertid lizard, which is distributed in east Afghanistan, Pakistan, and India. 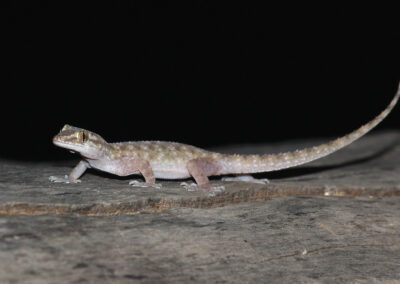 Lizard Sp. 16: Gleadow’s House Gecko (Hemidactylus gleadowi) is a species of gecko and it is endemic to India and Pakistan. (Photo: Mr. Dharam Veer Singh Jodha) 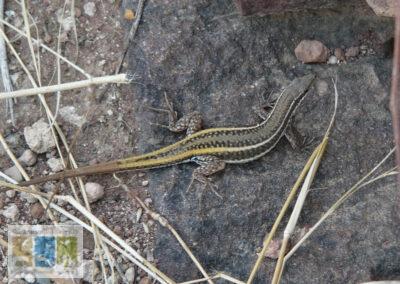 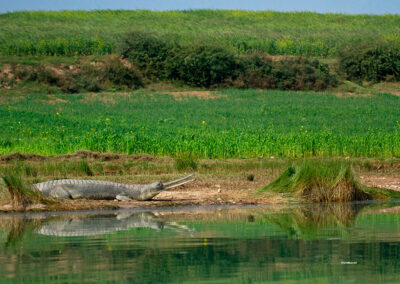 Gharials, sometimes called gavials, are a type of Asian crocodilian distinguished by their long, thin snouts. Once found in all gangetic rivers, the critically endangered gharial’s range is now limited to Chambal river only. (PC- Dr. Dharmendra Khandal) 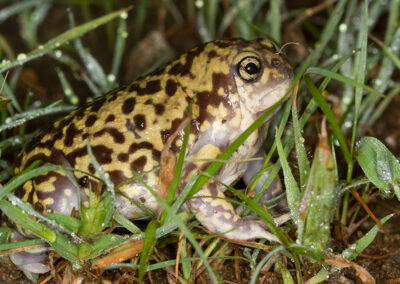 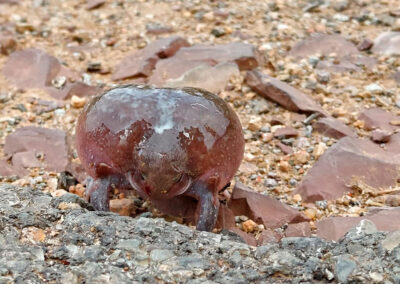