A Lizard on the Battlefield 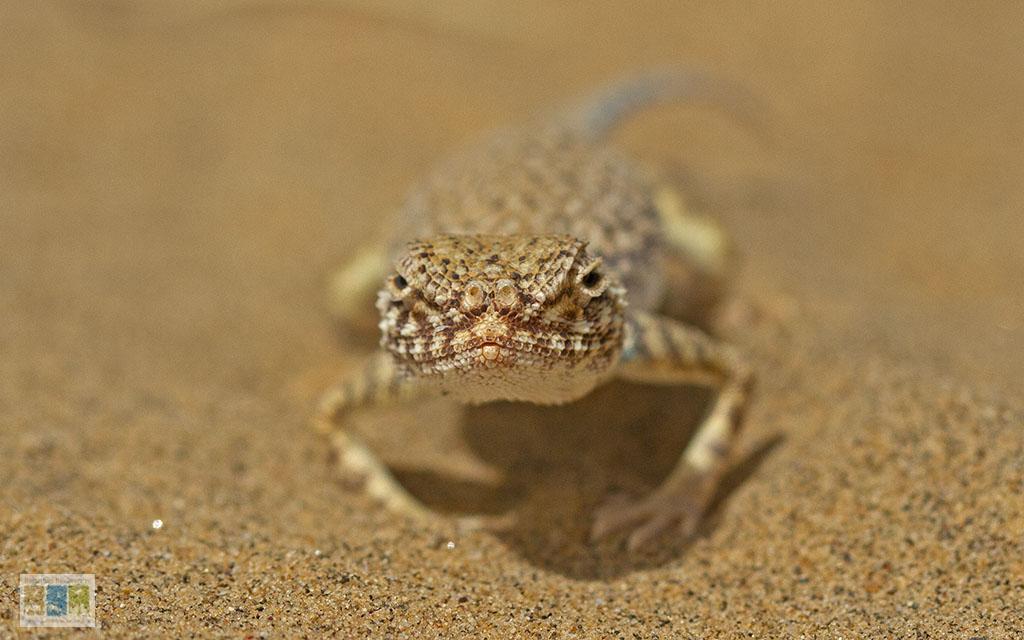 During the Indo-Pakistan War of 1971, a small contingent of the Indian Armed Forces (120 soldiers) held a much larger contingent of  the Pakistani Army of approximately 2000-3000 soldiers in one place, till the arrival of the Indian Air Force and fought very bravely till then. The famous bollywood movie Border, is based on this battle. The location of this historic battle is named Longewala.The area is remote,  there is an endless vista of sand and it does not rain for years, where people have no choice but to bathe with soil, and cannot prevent particles of sand from tainting morsels of food to such an extent that new visitors are not even able to chew properly. In the year 1978, a biologist discovered a new species of lizard here.

At first glance, the lizard appears very strange, for it looks like a toad with a tail. If you want to see this curious lizard, then you have to visit  Rajasthan’s Thar desert, to be precise, where the battle of Longewala was fought, albeit it is also found to occur in adjacent areas. Dr. Ishwar Prakash, a  scientist studying mammals from the Zoological Society of India (ZSI), was the first to catch it, and when he gave the first specimen to his herpetologist friend, Dr. R.C. Sharma, he was beside himself with joy. It was a lizard that had never been seen before.  However, one sample was not enough for his research, so Dr. Sharma tried to visit the corner of the desert where it was found. 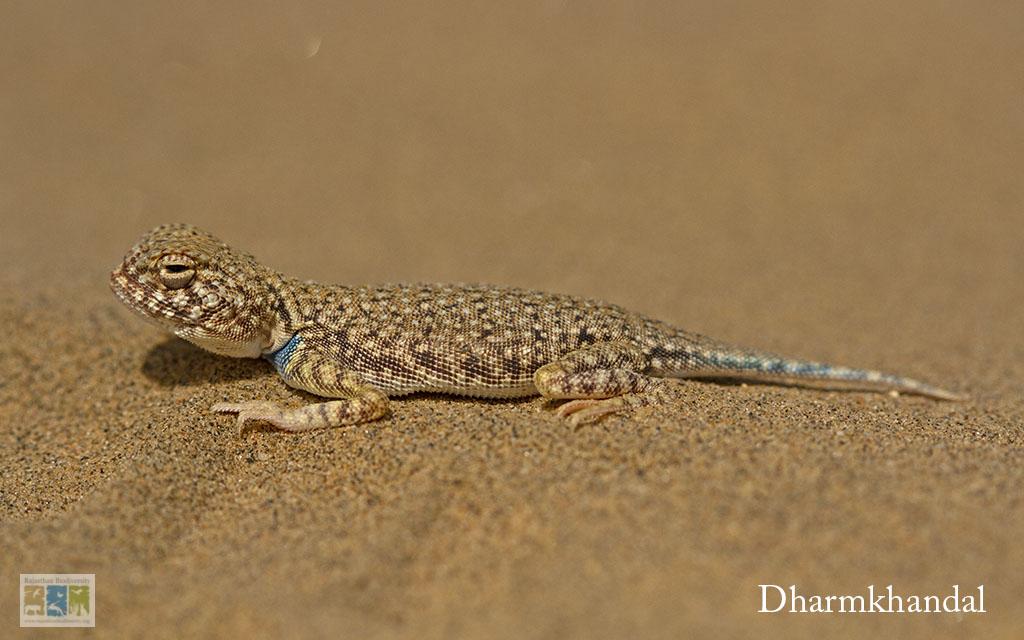 It was a difficult period, and only men serving in the Indian Armed Forces could easily access this remote area.Dr. Sharma got an opportunity to avail of a helicopter of the Border Security Force (BSF) which agreed to take him there,  but unfortunately the ZSI did not give him official leave. Dr Sharma decided to go to Longewala on personal leave, and after sourcing enough samples from there, he gave the lizard the binomial name – Phrynocephalus laungwalaensis.  Dr. Sharma did not mention Dr. Ishwar Prakash in this research publication by mistake. I had the privilege of meeting both Dr. Ishwar Prakash and Dr. R.C .Sharma (both have passed away since), and I had heard this story in their own words. 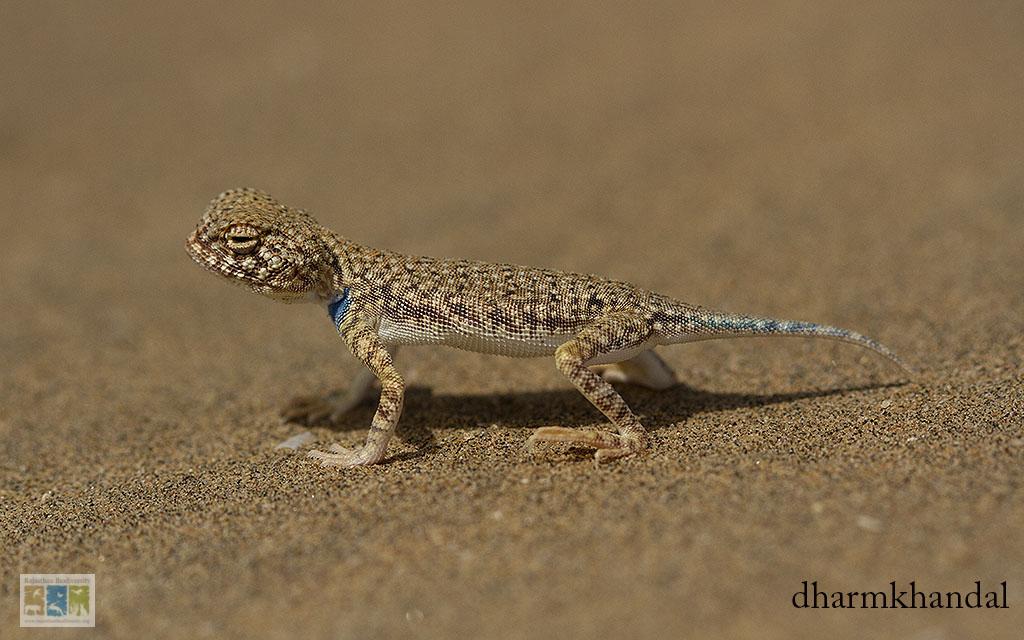 The unforgiving Thar desert. The toad-headed agama is endemic to the Thar. (Photo: Dr. Dharmendra Khandal)

However, Dr. Sharma overlooked some attributes of this lizard, and in 1992, a herpetologist named Arnold placed the lizard in a new genus Bufoniceps instead of Phrynocephalus. In fact, the genus Bufoniceps was created by studying this lizard. It is now known as Bufoniceps laungwalaensis. Thus,  there was not only a new species in Dr. Sharma’s hands, but a new genus, which could have proven to be a bigger discovery. 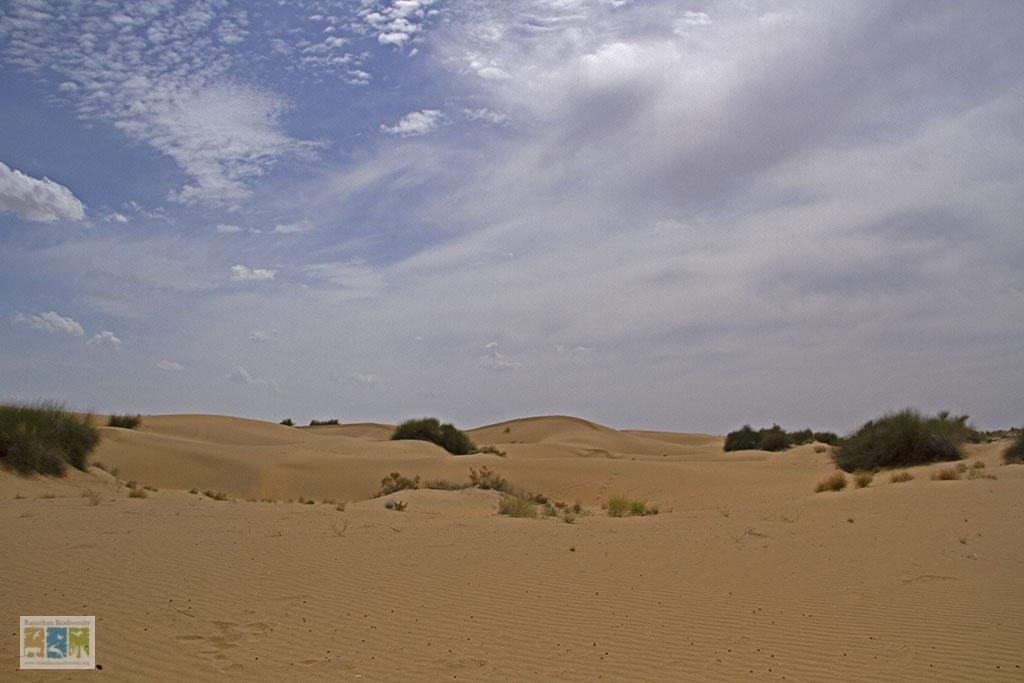 On all fours, and ready to run on the sand. (Photo: Dr. Dharmendra Khandal)

Dr. Sharma mistakenly used two spellings for its binomial name – “laungwalansis” and “laungwalaensis“. The addition of an ‘E’  became a subject of discussion for taxonomists. The norm would be to accept the first spelling, but the second spelling was correct on the basis of grammar. Eventually the second spelling was adopted, and it is now known as Bufoniceps laungwalaensis. However in vernacular terms, it is known as the  “Rajasthan Toad-Headed Lizard” or the “Longewala Toad- Headed Lizard”.

It is a diurnal lizard from the agama family. It can be seen running with astonishing speed on the desert sand, but when it senses danger, this small agama lizard measuring upto 29 to 69 millimeters, either runs and does not stop for a distance of 100 to 125 meters or else it creates a strange tremor in its body and disappears by hiding itself in the sand. It is not found anywhere other than Jaisalmer in Rajasthan, but  is also believed to occur in the desert across the border in Pakistan. Thus, this species is endemic to the Thar desert. However, this lizard’s habitat has definitely suffered due to unnecessary plantations in the desert.

Cover Photo Caption & Credit: The reason for which this lizard has the descriptor ‘toad-headed’ in it’s vernacular name (Dr. Dharmendra Khandal)