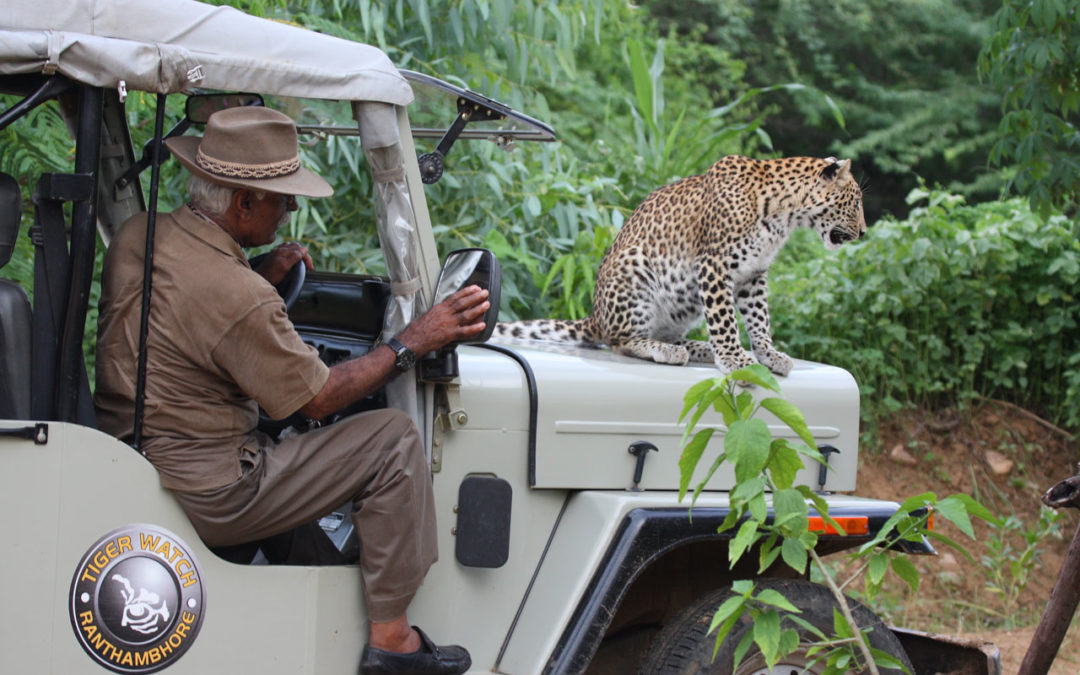 Fateh Singh Rathore, a world-renowned expert on wild tigers, was the man behind the development of Ranthambhore, then a small hunting ground of erstwhile maharajas of Jaipur to a world famous tiger national park.

Fateh came from a rajput family. His family is based in a village called Chordiyan near Jodhpur. Unlike other earlier tiger experts, he was never a hunter. He started a career in wildlife conservation by pure chance, after several failed attempts at other occupations that held no interest for him. Through his uncle’s connections, he got a job as a ranger in Sariska, and immediately knew that he had found his calling. He loved the forest, and soon grew to excel in fieldcraft, interpreting the signs of the forest as few others have been able to do. He was never very interested in studies or classroom work, and relied on empirical field observation rather than theories. As a result, he has been belittled by some who find him unscientific, forgetting that scientific theories originate from field observations.

Ironically, the first task he had to face in the area that became the Ranthambhore Tiger Reserve (RTR) was to arrange a tiger hunt for Queen Elizabeth II of Great Britain when she visited India in January 1961. In those days, wildlife tourism meant hunting, and many ex-Maharajas organized hunts for their visitors as a source of income for themselves. This area of Rajasthan was the hunting preserve of the Maharaja of Jaipur.

Hunting was banned in the early 1970s, when Prime Minister Indira Gandhi realised that the number of tigers in the wild had fallen dangerously low, merely 1800 as compared to around 40,000 at the beginning of the twentieth century. Project Tiger was set up in 1973, and Ranthambhore was one of the nine reserves chosen under its first phase, which aimed to include an example of each of the different types of habitat in which wild tigers were found. Ranthambhore is a dry deciduous forest. Fateh was given the responsibility of developing this new park, since his seniors, S.R. Choudhury who taught him at the Wildlife Institute of India in Dehradun and Kailash Sankhala, the first Director of Project Tiger, saw great promise in the young man. Fateh Singh Rathore ably lived up to that promise. He set to work planning and making roads through the park area, locating them in such a way that animals would always have access to drinking water, and ensuring that the paths meandered and were never straight. The whole area was very degraded, with most of the trees lopped for firewood by the inhabitants of 16 villages that existed in isolated pockets. Domestic cattle roamed everywhere, and the only evidence of the presence of any wildlife was an occasional tiger pugmark or deer hoof print. Fateh Singh Rathore realised that if the forest were to be allowed to regenerate, he would have to move the villages out of the area. He went about his task using a great deal of patience and tact, finding out from the villagers what they would want as compensation. Project Tiger ensured that the villagers were compensated with better land outside the park area, with five additional bighas of land being given to every male over the age of 18. They were also provided with money to build houses and dig wells, and were in addition given a health centre and a school, facilities that they had never had in the past. The new village was named Kailashpuri in honour of Kailash Sankhala. Once the villages were moved out, the forest began to regenerate on its own, becoming the incomparably beautiful Ranthambhore National Park, and in 1976, Fateh finally saw his first wild tigress there, naming her Padmini after his elder daughter. He began studying her with her family of four cubs (a fifth cub died young), and soon Ranthambhore became famous as one of the best places in the world in which to see wild tigers.

His experiences with wild tigers have been widely documented in the books that he and Valmik Thapar (now a very well respected tiger expert himself) and he wrote together. One observation they made and photographed was that the male interacts freely with his cubs. Up until then it was believed that the tigress brought up the cubs on her own. But they photographed a family in a pool together, father, mother and two cubs. On other occasions they saw the male even sharing food with the cubs, or playing with them. In the 1980s there was a tiger they called Genghis who developed his own way of hunting sambar by rushing into the lakes to catch them as they grazed. This technique has been documented on film. Many television documentaries featuring Fateh have been made in English, French, German, Japanese, and many magazine articles have appeared on him over the years. His work has earned him numerous international awards, the latest being given to him by the Worldwide Fund for Nature (WWF) as recently as 16 February 2011.

Fateh Singh Rathore was unfailingly good hearted, generous, kind and friendly. At the same time, he had a short temper, and lost no time in punishing anyone who he felt was harming any of the animals. As a result, although he was genuinely loved by many people all round the world, he was also feared and disliked by those who had done something wrong, or who had some of their shortcomings pointed out to them. His one agenda was to save wild tigers, and he did not hesitate to blow the whistle each time he felt things were going wrong. Every time he pointed out that some tigers were missing from the park, in spite of the forest department’s vehement denials, he was penalized in some way for his temerity, even though he was invariably proved right. Fateh Singh Rathore was a man of the purest integrity and honesty, but many tried to spoil his reputation by alleging all kinds of false things about him, all of which were disproved in court. One of the saddest phases of his life was when the forest department banned him from entering the park he did so much to create. Another was when he was given an office job in Jaipur, far from his forest, and had all his suggestions ignored even though his designation was that of “Technical Adviser”.

Sawai Madhopur, the town nearest Ranthambhore, has grown and prospered since I first visited Ranthambhore in 1983, its economy dramatically changed because of the employment opportunities generated by the park. Today Ranthambhore is one of the finest places in the world in which wild tigers can be seen, and it has given so much delight to so many people. Most of the images of wild tigers seen round the world are those taken in Ranthambhore. This success comes at a price: tiger poaching raises its ugly head from time to time, with tiger skins and body parts smuggled to China. Fateh’s approach to the poachers was unique, and very typical of him. He realised that the people who actually kill the tigers are not the ones who profit from the deed. They are very poor nomadic hunter-gatherers from the Mogiya tribe. Knowing that poaching cannot be curbed by jailing the poachers for a few days and then letting them off on bail to continue their occupation, he has been trying in the recent past to rehabilitate them by offering them an alternative livelihood. Through his NGO Tiger Watch, he set up a hostel for Mogiya boys where they are fed, clothed and sent to school, giving them an opportunity to improve their lives. The older boys have now started receiving vocational training to improve their prospects. The women are being taught various handicrafts. All these benefits are being given on condition that the men stop poaching tigers.

Fateh has always been a larger-than-life character, with a stentorian voice, full of exuberance and fun. He loved teasing his friends with a twinkle in his eye, and would tell all kinds of silly jokes, sing songs, tell his tiger stories around a bonfire on a chilly winter night. He loved meeting people and took to his heart all those who loved his forest. In fact it is largely due to him that so many people have become enthusiastic supporters of the cause for saving wild tigers. He was always a true and loving friend, and a benign and grandfatherly figure to the children who attend the Fateh Public School set up by his son Goverdhan, where they already practice the kind of inclusive education recommended recently by Human Resources Minister Kapil Sibal, offering freeships to village children who come from as far as 20 km away. His love for tigers was equally infectious, and influenced many younger conservationists. His brand of magic was nothing but his utterly genuine nature. There was never anything fake or malicious about him. He was just a very lovable and loving person, very childlike in many ways, and that is what endeared him to us all. He loved listening to sentimental ghazals, and was equally fond of jazz. I once took him to a well known music store near Kala Ghoda to select some CDs, and he was shown about 20 of the kind he wanted. After listening to a few samples, he decided to buy the lot.

Most of all, Fateh Singh Rathore loved being in the forest, seeing all his animals, savouring every sight, smell and sound. He had a sharp instinct for knowing where to find a tiger, and all his knowledge of tigers came from his keen and regular observation of their behaviour. He was so attuned to tigers that many of his friends referred to him as a human tiger. He even looked a bit like one, with his jaunty white moustache. It was an absolute delight and privilege to be driven around the park by him, charging his jeep into a meadow if he saw crows or vultures on a tree, in case we found a tiger there with its kill. He would hum with delight if he saw a tiger with his “Field Director’s eyes”. He knew every mammal, bird, reptile, insect or plant that was found in “his” forest, and loved them all.

It has been very painful to watch his health decline over the past two months since his cancer was diagnosed. At the end he even lost his voice, and found it difficult to communicate what he wanted. Every mouthful of food or sip of water would bring on a fit of coughing. Yet he was extremely brave until the very end, surrounded by his loving family and friends who did all they could to ease his discomfort. The cancer won in the end, mercifully sooner than expected, and he breathed his last on the morning of 1 March. The cremation was planned for the next morning, and his body was laid out in the living room of his beautiful house, overlooking the hills on the outskirts of Ranthambhore. Almost miraculously, at 4 a.m. on the day of the funeral, a tiger was heard giving three roars directly behind his house, followed by a clamour of alarm calls by other animals and birds. They came to call their father home, and that is where we shall continue to find his benign spirit, watching over the special piece of earth he made his own.

Ms.Soonoo Taraporewala is keenly interested in issues related to nature conservation. After working for over twenty years in British library, Mumbai, she now follows her passion in wildlife, literature, travel and photography.