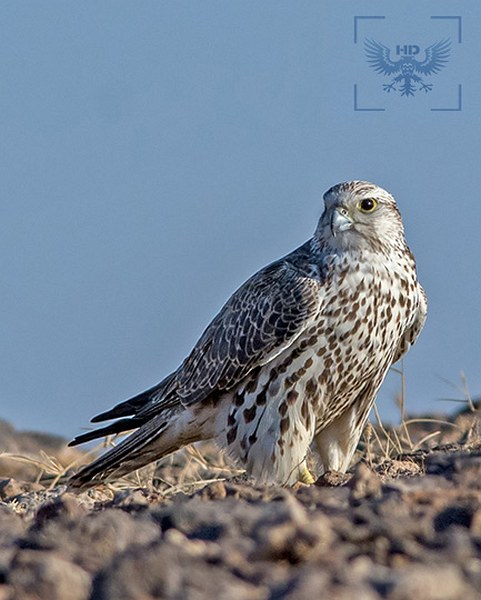 Saker falcon is the largest falcon seen in the Indian Subcontinent. Due to its prowess as a hunter, it has been prized by humans for centuries, particularly by falconers.

It has been uplisted in the IUCN Red List as Endangered because of the latest analysis which indicates rapid decline in the population. IUCN states “This negative trend is a result of a range of anthropogenic factors including electrocution on power lines, unsustainable capture for the falconry trade, as well as habitat degradation and the impacts of agrochemicals, and the rate of decline appears to be particularly severe in the species’s central Asian breeding grounds”

Saker Falcons are large brown coloured falcons. There are many subspecies of the Saker falcons however in India, we get to see 2 type of birds. The Ladakh population is often referred to as Altai Saker while which are dark brown coloured bird with rufous barring on the upperwings and the ones which we get to see in the Thar Desert are usually the nominate migratory subspecies which are relatively paler brown than the Altai Saker.

Saker falcon can be identified Dark upperparts and pale underparts with brown streaking in juvenile and tear drop markings in adults. It can be confused with similar looking species like Laggar Falcon and Juvenile Peregrine falcon. However by keen observation, following pointers can help in confirmation of the identification of saker.

In India, it is considered to be a rare bird with a small number of resident breeding population limited to Ladakh region and migratory birds seen ocassionally near the Himalayas and regularly in and around the Thar desert of Gujarat and Rajasthan.

Sakers are physically adapted to hunting close to the ground in open terrain, combining rapid acceleration with high maneuverability, thus specializing on mid-sized diurnal terrestrial rodents like Desert Jird and Bandicoot. However they also predate on small to medium sized birds ranging from Larks to pigeons.

Mr. Nirav Bhatt is a well known raptor expert of India. he is a keen photographer and based in Gujrat.