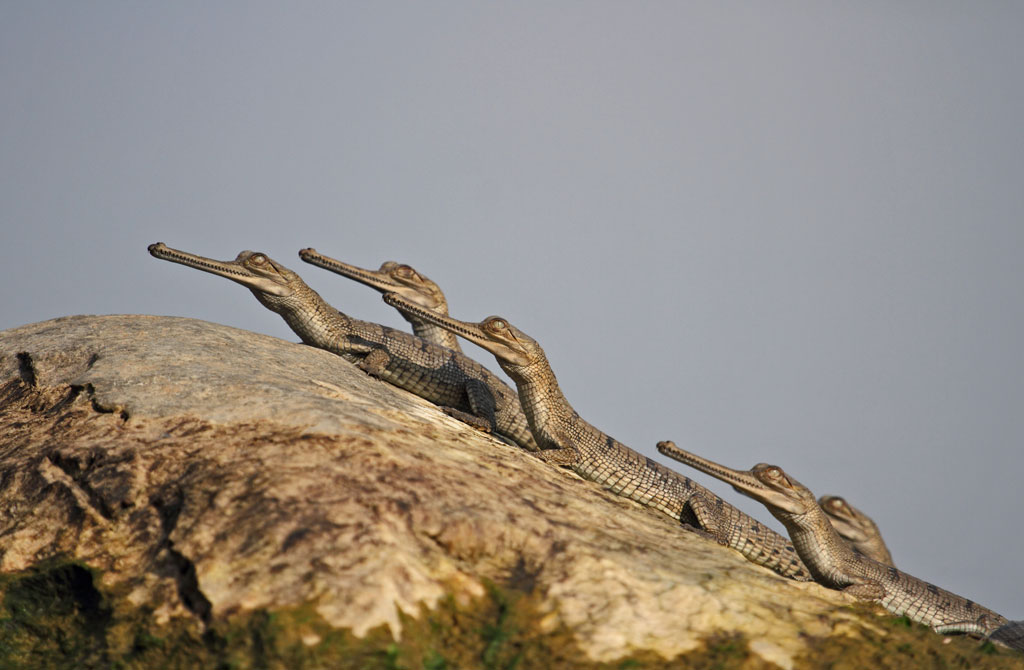 The year 1972 marks a major milestone in the conservation history of India. With the promulgation of the Indian Wildlife (Protection) Act, this was also the decade when a threatened crocodile species – the ‘Gharial’ received unprecedented national and international attention. By 1974, gharial populations in India had purportedly reduced to around 100 adults and, the crocodile was deemed close to extinction. Taking cognizance of the situation, the united Nations Development Program (UNDP) and the Food and Agriculture Organization (FAO) of the United Nations collaborated with the Government of India (GoI) to initiate Project Crocodile in 1975. This project brought together scientists, zoos and government officials through a major concerted effort for reviving gharial populations. New sanctuaries were set up to provide inviolate spaces for gharials to thrive. During the same time, based on recommendations from the ruler of the erstwhile state of Bareh in Etawah, a segment of the river Chambal was surveyed in 1975. And, a clutch of 38 gharial eggs was discovered, which indicated that the Chambal could be a potential gharial habitat. On further assessment and recommendation by Dr. H. R. Bustard, (Technical Chief Advisor of the Project Crocodile) the GoI decided to declare the entire stretch of Chambal that flowed through Madhya Pradesh, Rajasthan and Uttar Pradesh as the National Chambal Sanctuary (NCS). National Chambal Sanctuary is the first and only tri-State protected area in India notified for the conservation of a Crocodylian (Gavialis gangeticus) species. This sanctuary is also considered the most enduring legacy of the Project Crocodile in India.

When it comes to the presence of species of conservation importance, Chambal River is probably one of the few rivers in north India that provides crucial habitat for several species to exist. The most important of all, is probably the Gharial. Presently, National Chambal Sanctuary contains the largest and most viable breeding populations of the Critically Endangered Gharial (Gavialis gangeticus) and the Red-crowned Roofed Turtle (Batagur kachuga). It is also identified as an Important Bird Area, serving as crucial breeding grounds for the some important threatened birds like the Vulnerable Indian Skimmer (Rynchops albicollis) and the Endangered Black-bellied Tern (Sterna acuticauda). NCS hosts the largest population of Indian Skimmers as winter visitors, who also nest in colonies and reside in the sanctuary till pre-monsoon. The Jawahar Sagar reservoir is one of the last places along the Chambal River where the Smooth Coated Otter (Lutrogale perspicillata) still exists. This otter species once widespread along the entire river, but through hunting and habitat alteration it now finds itself confined to a very small region. The ravines of the National Chambal Sanctuary are home to lesser studies mammal species such as the Caracal (Caracal caracal), Indian Pangolin (Manis crassicaudata) and Oriental Honey Badger (Mellivora capensis) among many others. The ravines also contain den sites for charismatic mammal species such as the Indian Fox (Vulpes bengalensis), Desert Fox (Vulpes vulpes pusilla), Indian Wolf (Canis lupus pallipes), Striped Hyena (Hyaena hyaena), as well as roosting and nesting sites of birds such as the Bonelli’s Eagle (Aquila fasciata), Egyptian Vulture (Neophron percnopterus), Brown Fish Owl (Ketupa zeylonensis), Indian Eagle Owl (Bubo bengalensis), Peregrine Falcon (Falco peregrinus), Laggar Falcon (Falco jugger). The sheer cliffs along the river in the Kota district hold one of the largest vulture colonies in India along with other raptors.

Chambal River forms an integral part of the Greater Gangetic River System. The 960 km long Chambal River originates from the Singar Chouri peak in the northern slopes of the Vindhyan hill ranges near Mhow in Indore District, Madhya Pradesh. The river first flows in a northerly direction in Madhya Pradesh (MP) for about 346 km and then in a north-easterly direction for 225 km through Rajasthan. The Chambal flows for another 217 km between MP and Rajasthan and a further 145 km between MP and Uttar Pradesh (UP). It flows only in UP for about 32km before its confluence with the Yamuna River.

The Chambal revives the Yamuna with a much needed dose of freshwater, after the Yamuna struggles through Delhi and Agra. With the unique habitat and the species that exist, the Chambal is one of the last remaining rivers of the Greater Gangetic system that still holds significant conservation values.

The River, within the NCS, can be divided into three parts. The first part, in Rajasthan, between Jawahar Sagar dam and the Kota Barrage is characterized by a deep gorge and sheer cliffs on both the sides of the river. The second part, from Keshoraipatan to ~300 km downstream along the Chambal and including the Parbati River, is a predominantly rocky stretch, characterized by a steep gradient. This stretch of the river comprises of several rapids, riffle stretches and medium sized waterfalls. The third part, comprising of the remaining river stretch, is a mainly sandy stretch. The river in this part, after hurtling and gushing its way down the central Indian plateau, arrives closer to the northern plains, and is adopts a much calmer and gentler nature.

The Chambal River and the adjoining ravines were famous for the dreaded gangs of dacoits who were as abundant as the crocodiles in the river. The presence of the gangs had rendered the area relatively lawless. As a result, the region remained fairly untouched and the biodiversity in turn remained protected as a consequence of the ‘dacoits’ reign of terror. The reasons attributed to the Chambal’s relatively pristine waters and undisturbed biodiversity, are unique allusions to it, in history, of being an unholy river. The Chambal ravines are generally peaceful today, and though their romantic allure remains, it is more as a part of the historical narrative of this land, than as a way of life.

The current state of Chambal River although reminds us of the consequences of unregulated anthropogenic pressure on natural landscapes and ecosystems. The Chambal River has been running dry due demand for water from legal and illegal construction of dams, over-extraction of water and illegal fishing. The immediate most severe threat has come in the form of rampant sand mining from the banks of Chambal River, which is almost reshaping and altering the resilient riverine ecosystem to a point of no return. The River has always sustained the necessities of local communities living around it. But, it may not have enough to give towards the ever-increasing greed of human needs. With the rivers of India gaining spotlight, now may be the best of times to repair the damages that we have caused the River Chambal.