Rohida Flowers And The Nectar Robber Sunbird: An Interesting Story Of Pollination 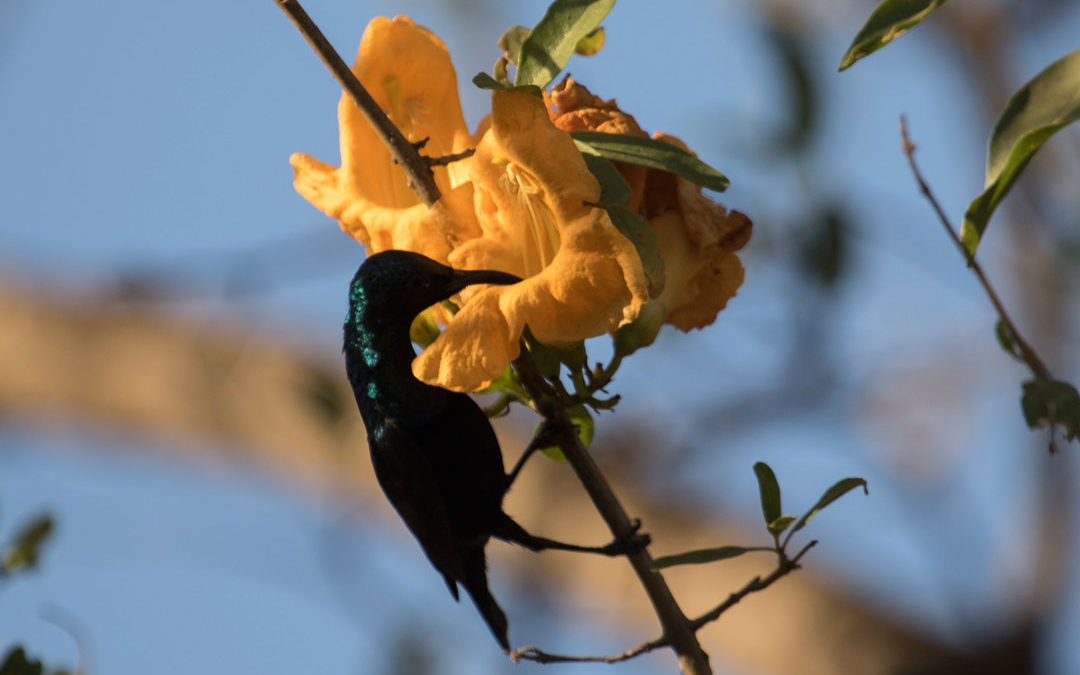 Sometimes the bright colors of the flowers and sometimes their sweet fragrance attracts bees, insects, butterflies and birds who extract the nectar of flowers, and helps in the process of pollination. Pollination is a process in which the male part of the flower – the pollen grain from the anther, reaches the stigma female part of the flower from some medium (air, water, bird, insect, etc.) and fertilizes the eggs in the ovary.In the desert of Rajasthan, when the Rohida trees undergo mass blooming with yellow, orange and red flowers, during this time, there is an interesting behavior between the red-vented bulbul (Pycnonotus cafer) and the purple sunbird (Cinnyris asiaticus) foraging around these flowers. This behavior shows many interesting aspects of pollination.

The “Tecomella undulata”, found mainly in Rajasthan, which also has the status of state flower, is found especially in the desert areas of Rajasthan. It is an deciduous tree of the family Bignoniaceae, and similar to ‘Flame of the Forest’ (Butea monosperma), Rohida also undergo ‘mass blooming’, in the spring season. Rohida is of high ecological and economic significance to Rajasthan, especially in the desert regions where it flourishes on sand dunes. . It can tolerate both, extreme low temperatures (about −2 °C) and high temperatures (about 50 °C) which is why it is also probably termed the ‘Desert Teak’ or ‘Marwar Teak’. It is known for its strong and durable wood quality. Today high anthropogenic demand, coupled with the fact that Rohida are ‘slow growers’, has lead to the tree being included in the IUCN Red List of threatened species. Rohida currently faces a high risk of extinction and its future remains uncertain today.

Its flowers are of the shape of a trumpet – from which birds extract nectar in two ways – either by putting their head inside the flowers; Or by making holes through its beak directly on the base of the flowers without aiding pollination. This behavior is also called Nectar robbing’ – a method by which animals extract nectar without coming in contact with the pollen of flowers.

Bulbul extracts nectar by putting his head inside the flower and while doing so Bulbul’s head, and his black head is painted yellow with pollen dust. Whereas the Sunbird extract nectar by making a small hole at the base of the flower without helping in pollination and this process is called Nectar robbing. The reason why a sunbird steals nectar is that it does not easily reach nectar stored at the base of the flower, because the flower is bigger than the sunbird. Sometimes if she puts her head in the flowers, then the anther filled with pollen do not touch her. Because of which she does not participate in the process of pollination.

For a successful pollination, it is very important to have a morphological compatibility between the shape & size of the flower and the shape & size of the beak and head of the bird. That is, Bulbuls appeared morphologically compatible with these flowers, with their larger heads and comparatively smaller beaks, which is why they needed to completely pop their heads inside the flower for nectar and while doing so, their heads may have come in direct contact with pollen. In comparison, sunbirds having smaller heads and needle-shaped long beak sizes indulged in extracting nectar with minimal contact to pollen in the flowers.

In this process, the sunbird is completely established as a parasite, but we look deeply, even if the sunbird steals nectar from the flowers, it also indirectly helps in pollination. As during the nectar robbing sunbird visit multiple Rohida flowers at a higher frequency, thus increasing competition and influencing bulbuls to visits multiple trees in adjoining areas. This symbiotic behavior between the birds may indirectly helped Rohida trees in cross pollination.

In fact, both sunbirds and bulbuls play an important role in pollination, but in this case bulbuls can be termed as “true pollinators” and sunbirds are “influencers”. Similar observations have also been given in a research paper entitled, “Nectar robbing positively influences the reproductive success of “Tecomella undulata” where the Purple Sunbirds foraging techniques were correlated to positively affect on cross-pollination in Rohida.

Like the sunbird, the bulbuls also makes holes at the base of the flowers, and two different types of markings are often seen on the flowers falling from the trees – such as small holes on the base of some flowers, and large oval holes in some. By looking at the size of birds, it is clear that small holes are made by sunbirds and large holes are made by bulbul. Apart from this, it is also seen that on coming into contact with the bulbul, many times the soft flowers also broke and fall. It may be that the purpose of the bulbul is not to get nectar from the flowers, but only to break them. If flowers are seen falling from the trees, it is found that most of the flowers are not naturally wilted but broken by birds (especially bulbul), or broken by their carelessness. According to a study done by Dinesh Bhatt and Anil Kumar (Fortkail 17, 2001) on the eating ecology of red-vented bulbul in India, it could be attempts of bulbuls to feed on Rohida petals. On the other hand, these fallen flowers are eaten by Chinkara (Gazella bennettii) and Nilgai (Boselaphus tragocamelus) etc. and this shows the commensalism between the red-vented bulbul and antelope.

So, this time, when rohida flowers blossom in the month of February-March, try to see this behavior between different birds with Rohida flowers.

(Translated from Hindi to English by Ms. Payal Tatwal)

Ms.Meenu Dhakad has worked with Tiger Watch as a conservation biologist after completing her Master's degree in the conservation of biodiversity. She is passionately involved with conservation education, research, and community in the Ranthambhore to conserve wildlife. She has been part of various research projects of Rajasthan Forest Department.