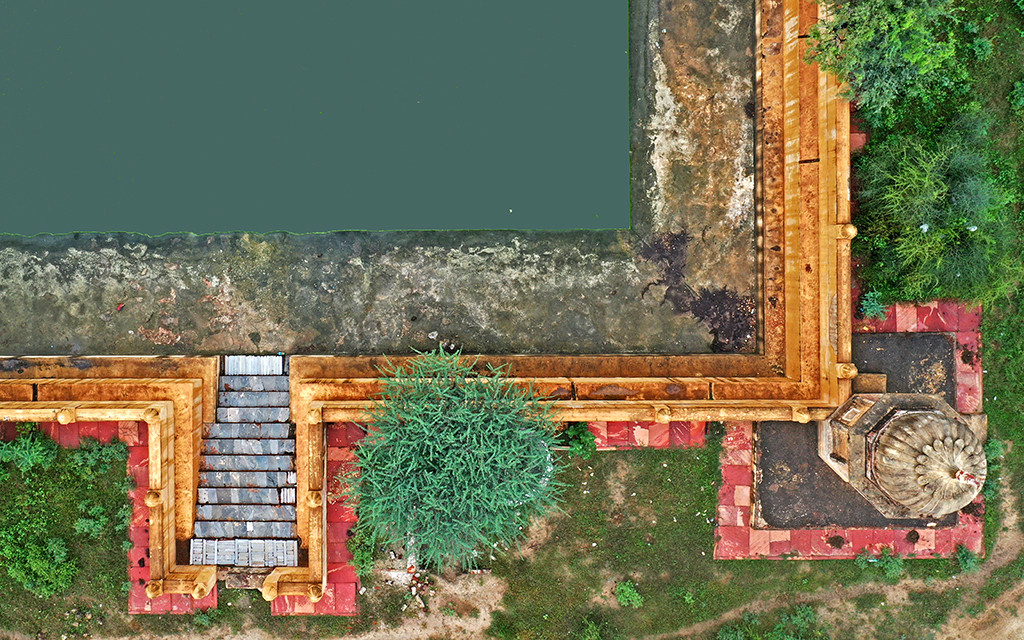 To study water conservation closely, you can base the culture of the amazing Johads and Kunds of Shekhawati…

When dark clouds loom over the sky people of the Churu district of Rajasthan start to clean the roofs of their houses in hope to collect every sacred drop of clean and pure monsoon showers for storage. The districts of Sikar, Jhunjhunu and Churu are famed as the Shekhawati region. Most of the families in these regions construct a water tank which is specifically made to collect rain water for families consumption. In the native language, it is called Kund. In the dry arid regions of the brutal desert landscapes, this practice has been followed since centuries. 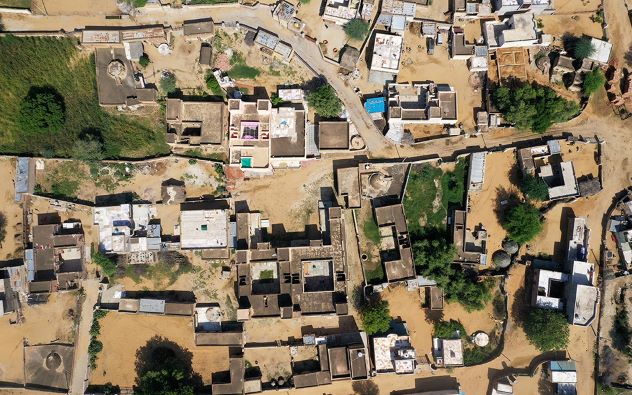 A view of the Somasi village (Churu, Rajasthan), in which a kund (Tank) can be seen in every house after a deep look. This water is used throughout the year for drinking, which is also free from fluoride. (Photo: Mrs. Divya Khandal)

Water has been a precious commodity in the desert, until few decades ago water was as scarcely used as clarified butter! The water used for bathing was given to cattle for consumption and utensils were washed with dry sand. There was no sewage line in the desert as there was no free-flowing water, except in the limited monsoon season rains. The water from these water tanks is used only for drinking. All the other chores like washing clothes, for cattle consumption and other activities water from the well is used which is very saline and high in fluoride.

Similar to the kund another ancient practice of making johads is very valuable and pertinent to such landscape. As per the churu district resident Shri Manoj Gorasia, the domestic as well as wild animals have benefited from this practice. 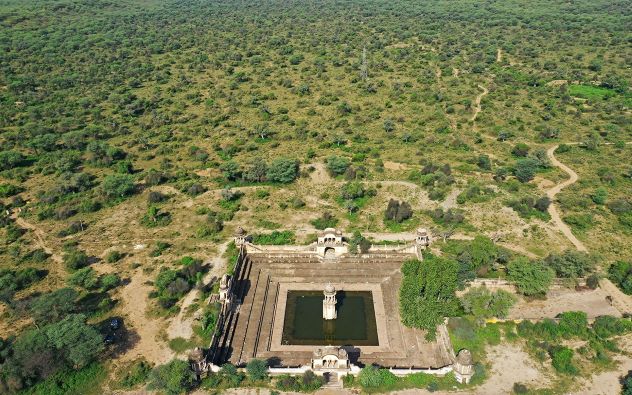 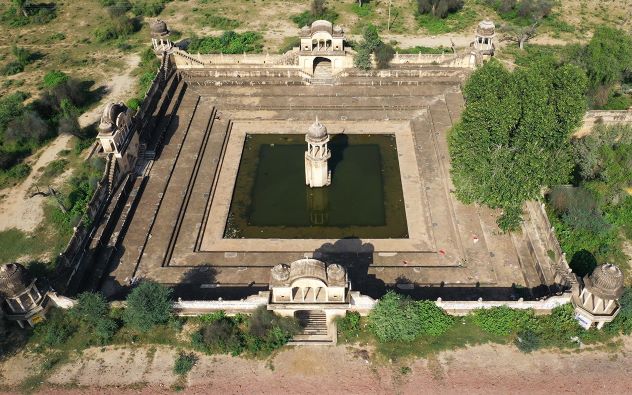 Areas from farmlands, pastureland and sacred groves which was high in gypsum was chosen for building the johads as it would retain the monsoon water for longer. In between the sand dunes there are patches of gypsum and villagers would make shallow depression in order to collect the rain waters. These areas are also known as Paytan or catchment area. Keeping this water safe and clean for drinking is a task. For this village folks appoint a person who is responsible for checking on any dead animal in the vicinity and ensuring that no one defecates also it’s important to keep a watch on any children coming in the spot for having a swim as it can lead to an accident. 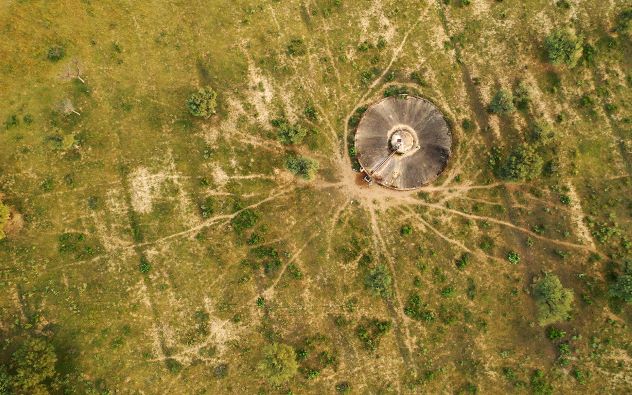 The footpath near this Jal Kund tells how much they are still used today, this Jal Kund is located near the village of Rollsabsar (Churu District). (Photo: Mrs. Divya Khandal) 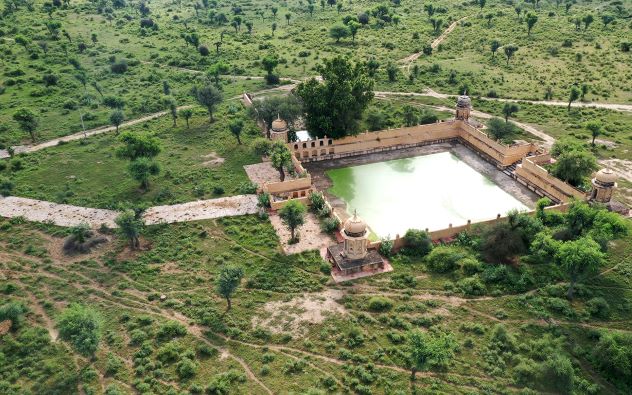 There are hundreds of Chinkara and other wildlife living near Johad, located near Ramgarh town, which uses its water. (Photo: Mrs. Divya Khandal)

Water is life and for this reason these areas are looked up to like temples. Every member of the community follows rules while visiting johad such as not using the spot as outdoor lavatory, not taking out the gypsum soil for any other purposes etc. Shri Gorasia says that following these small but vital rules by the society has kept the livestock, wildlife and humans alive and balanced their synergies too. The affluent areas of shekhawati has seen fortification of such johads with lime, stones. Many took this as a matter of pride and beautified the johad construction demonstrating the glorious history of the region. 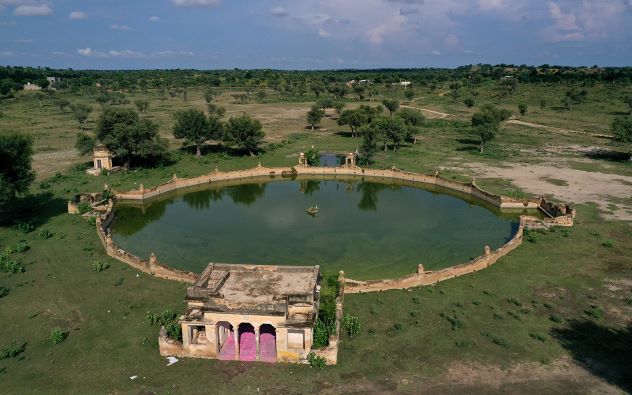 The use of Johad of Pithalana village (Churu district) provides water supply to animals, this place is also a good picnic spot. (Photo: Mrs. Divya Khandal)

In the small town Ramgarh of Shekhawati, there is great efforts being put in the protection of the neighbourhood johads by Mr Om Prakash Kalawatiya. Mr Kalawatiya’s opines is that at the moment we are combating climate change and Rajasthan is entering in the dark zone in terms of its ground water resources. He says it’s sad that instead of trying to preserve these old methods of water conservation the government is busy destroying these johads. Giving example of Ramgarh johad he says the government has allocated its resources to four departments and construction of offices has been done in the place whereas it is legally not permitted to construct anything in the area near or on the johads land. 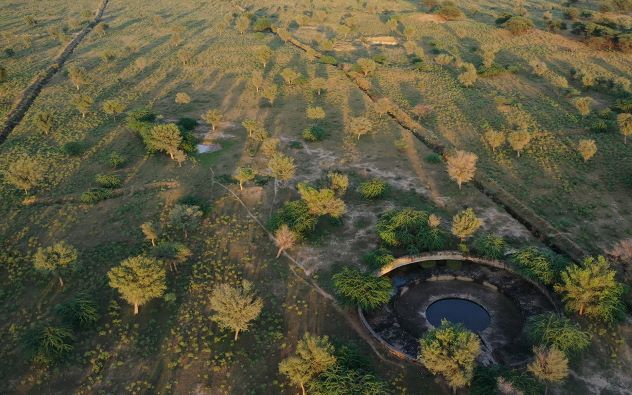 Gol Johad, located in the forest area of ​​Churu, forms the basis of life for wildlife for many months, mainly when many types of birds come here from far off countries after migration. (Photo: Mrs. Divya Khandal) 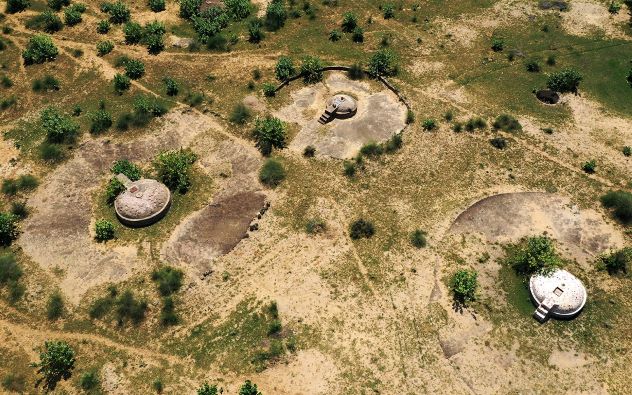 Community pool (tank) of the village of Charanwasi (Churu district) from where villagers use water for all their needs. There has been a continuous decline in its maintenance due to reduced community engagement. (Photo: Mrs. Divya Khandal)

When asked about the present-day relevance of these johads, Mr Kalawatiya says that humans have created all sort of conveniences for themselves but if you ask the cattlemen, they will tell how important these water bodies are in the desert even today. The wild life is the worst sufferers.

In spite of strict guidelines by the Hon. Supreme Court about strict inspections of the johads the government is careless and lazy about its proper management and preservation. The area of johad are getting adversely affected by the pollution and waste choking on the surface and sewage water entering from nearby village sewages. Remaining devastation is carried out by unwanted government officials who carry out the MNREG work in the johad land, as no one is there to oppose the act, blatantly rules are broken and our heritage is being destroyed on the whims and fancies of local officials and contractors. It is a sorry state of affairs and our ancestry is being wiped out by our own hands. 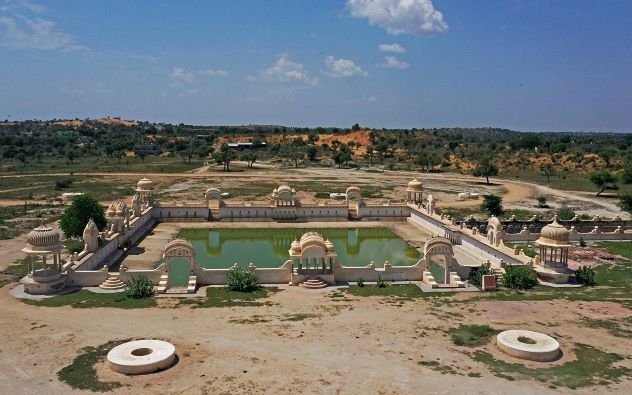 Johad of Churu city known as Johad of Sethani. The government has kept it in good condition by continuously getting it repaired. (Photo: Mrs. Divya Khandal)

The only way to revive this is by creating awareness drive and ensuring that the place is brought to light not just as our heritage but as a useful water source in the vicinity for the present generation too.

Mrs. Divya Khandal is the director of Dhonk Crafts in Ranthambhore Tiger reserve and she is a wildlife enthusiast.